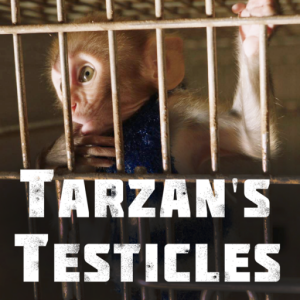 I just found out that Professor Boris Arkadievich Lapin has passed away on April 30.  At 98 years, he was still running the Russian Institute of Medical Primatology (RAMS) in Sochi, as Scientific Director. Boris Arkadievich has been the director of the Primate Research Institute (NIIEPIT) in Sukhum since the 1950’s until 1993, when he fled Abkhazia for Russia during the first Georgian-Abkhaz war. He took with him many of the doctors and a number of monkeys and built a new institute – that is now much larger and stronger than the original one from Sukhum. Professor Lapin was a highly respected personality in the medical international milieu while in Russia I felt he embodied the lost prestige of Soviet science. I filmed his 90th anniversary and his 95th celebration – both organized during international primatological congresses – and for the sake of our hopes in immortality – I secretly wished he would make it to 100 years.

His secret for longevity must have been – contrary to the rumors that surround any grandee like Professor Lapin – work and a strong discipline, not the hormone-treatment or monkey testicle-transplants that are usually linked to the mythology surrounding the Institute in Sukhum and its founder, Ilya Ivanov or Samuel Voronoff, his more lucrative fellow researching the same field in France. It was Voronoff’s specialty to graft chimp testicles to old rich men and I was recently surprised to hear his name mentioned in “Fedora“, a film by Billy Wilder. The character who utters Voronoff’s name is Doctor Vando, who is in charge of maintaining the young looks and juvenescence of a fading movie star, Fedora. Doctor Vando is said to have been Voronoff’s assistant, which made him prone to try the most daring plastic surgeries on Fedora, that ended up by destroying her face.

I viewed this mention of Dr. Voronoff under a new light in these times of pandemic, when science and its related mythology have again taken center stage. Him, Ivanov and their lot had been working in times when everything seemed possible, when science was about to cure everything and give immortality to humans. Though Professor Lapin’s glorious career was not based on such irrational and irresponsible experiments as his predecessors’, Boris Arkadievich’s symbolic aura – and concrete political power – was built on the same heroic world view. He was a Hero of Science (as well as a war-hero, a pilot wounded in combat against the Nazis) that was fighting Death. Professor Lapin’s heroic personage was tragically highlighted by the fact that he had survived his wife and children. It also gave his longevity a strange, sorrowful prominence.